Although I have been discouraged from learning anything about Visual Basic by some people…I am doing it anyway!

Visual Basic is a ‘high level’ programming language created by Microsoft. (Apparently high-level means that there is a strong abstraction from the details of the computer, which means it might use more ‘natural language’, should be easier to use, and might hide or automate significant areas of the programme to simplify. This sounds good to me, a beginner).

I have become interested in it over the years, purely because you can use it to automate things in Excel. After I had learned a bit of JavaScript, I went into VBA in Excel to try and make something and I saw that the language made some kind of sense – so I think I am ready to start learning a bit more about it. Note that you can learn the basics of Visual Basic without needing VB Professional, just because there is an editor inside MS Excel.

Apparently you can use VBA in a number of Microsoft Office applications, and not just Excel, so this could be even more useful than I originally thought.

2.  Alternatively, you can click on Visual Basic in the Developer ribbon and start writing  functions inside the VB Editor

If you choose option 1, the command button, then when you double click on it, it will take you to the Visual Basic Editor, which will already have a bit of code in it, looking like this: 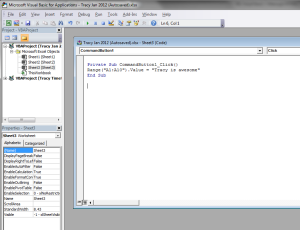 This will Fill up cells A1:A10 with that text. To see it in action, you have to click out of design view (on developer tab), then click on the button.

Where it says .Value it is because it is giving you the value of that cell. There are a lot of other things you can use other than .Value.  e.g.

NOTE – the annoyingness of having to remember that coding languages won’t accept my spelling of colour.

Like in other programming languages, if you want to save values  you will need to assign them to variables by

You have to declare them before you use them.

If you give the variable type a value like

– then data type is a string. If you don’t yet have a value, but you know that the name variable has to be a string, then in the Editor you can declare the variable like this

(Trick – Dim name As String *10 – means that the max characters allowed for the name variable is 10).

Where message is the variable.

Prompt is the message in the box (“Click Yes to Proceed, No to stop”)

Style Value refers to the kind of buttons (vbYesNoCancel)

You can also use an Input box.

Some Other things you can do in Visual Basic for Excel:

To be honest – I don’t think I have yet learnt anything which I couldn’t do with normal Excel formulae…but I am only halfway through the lessons on that site, and the second half promises some useful applications, so we will see.

In other ‘learning to code’ news