Yes I know You All Know This

As a newbie to development I always feel like there are a zillion things to learn, and I need to learn them all at once. So far, I have focussed on practical coding – Ruby, HTML, Javascript, etc.  I also expanded out to get my head around coding concepts by doing a couple of CS101 courses (Stanford and Udacity).

However, there are some things which get mentioned over and over again, which I don’t understand, and which aren’t explained in any of my ‘beginner’ courses.

For example. Middleware. Rack. I’m not sure exactly where to get this kind of knowledge, but I keep stumbling across little pieces of the puzzle. Here, I’m putting my pieces together, so I don’t forget them, and so they can start painting the picture.

This Rails Cast gives a breakdown on the middleware that is in place with normal Rails apps, and even though what each of those pieces of middleware does was pretty much over my head, a few basic concepts came through, which I didn’t understand before watching this:

Middleware is what goes on between receiving a request from a browser and sending the response from your app. 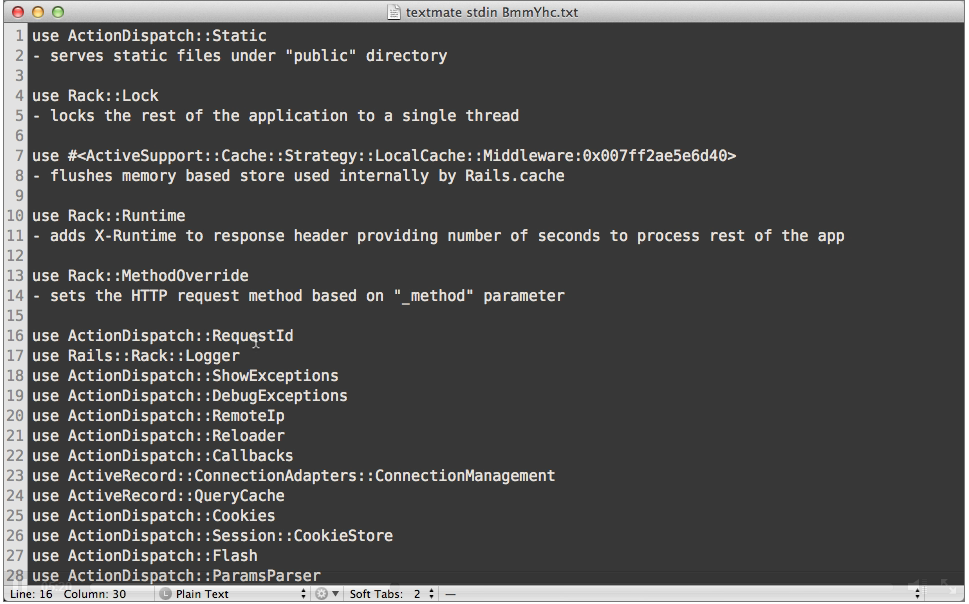 Again, I don’t know exactly why these things are necessary, but I guess they are necessary to make your app run as expected.

Now, having said all that, the next thing to understand is “Rack”. For which I have these pieces of the puzzle:

I can’t find one individual resource on understanding these things because I don’t understand a lot of what is said in those casts/blogs. However, I’ve rummaged around and found out enough for now to satisfy my curiosity.

So for a year, I’ve been trying to learn to use Git and Github effectively. It hasn’t been easy for me. It seemed like my brain just wouldn’t work that way. However, I feel a lot more confident recently, and I’d say the biggest steps to my improvement in Git usage (apart from just not giving up) was reading “The Git Book”. Something about this really helped things click with me, and I can’t recommend it highly enough. I’m not even finished reading it, but already I am using a work flow in Git and not being so scared.

It also helped to keep at it, using it in a few different ways with a few different people – yet again the super helpful and patient Ruby community in Sydney comes to the rescue.

Here I am just going to record the current steps I am using in my Git workflow, so as not to forget.

I am having ‘master’, and not doing anything on it.

I have a ‘develop’ branch, from which I branch to do each little bit of work, and then merge each one into ‘develop’ before I move on.

My branches off ‘develop’ are called things like ‘feature/view-refactor’.